last night, while peter did a little reading [rare!] i did some online shopping. can we just point out, that with all the sales popping up and being in the mood for gift giving, this proved to be dangerous! here are some seriously cute outfits and items i found, just for the little dude in your life. 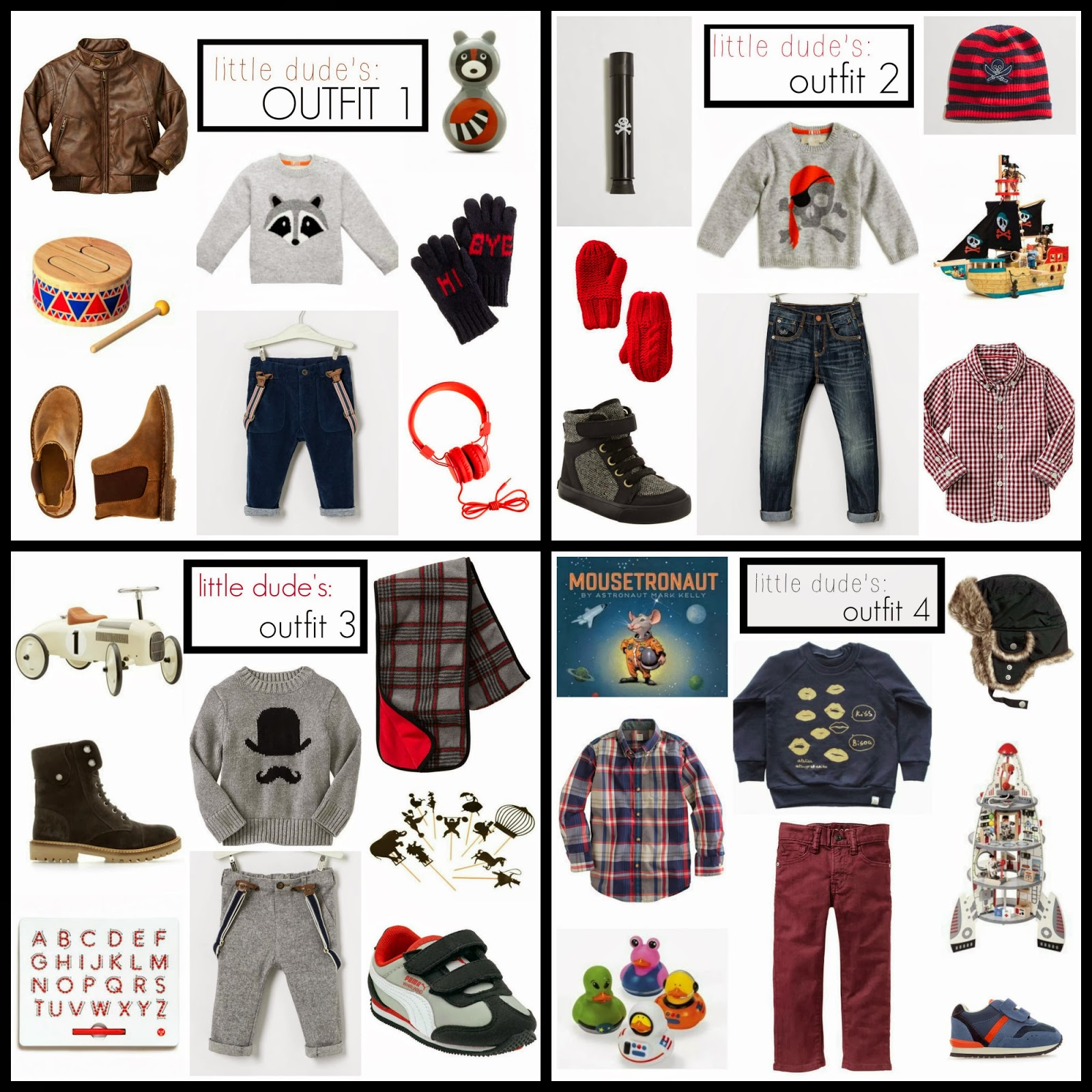 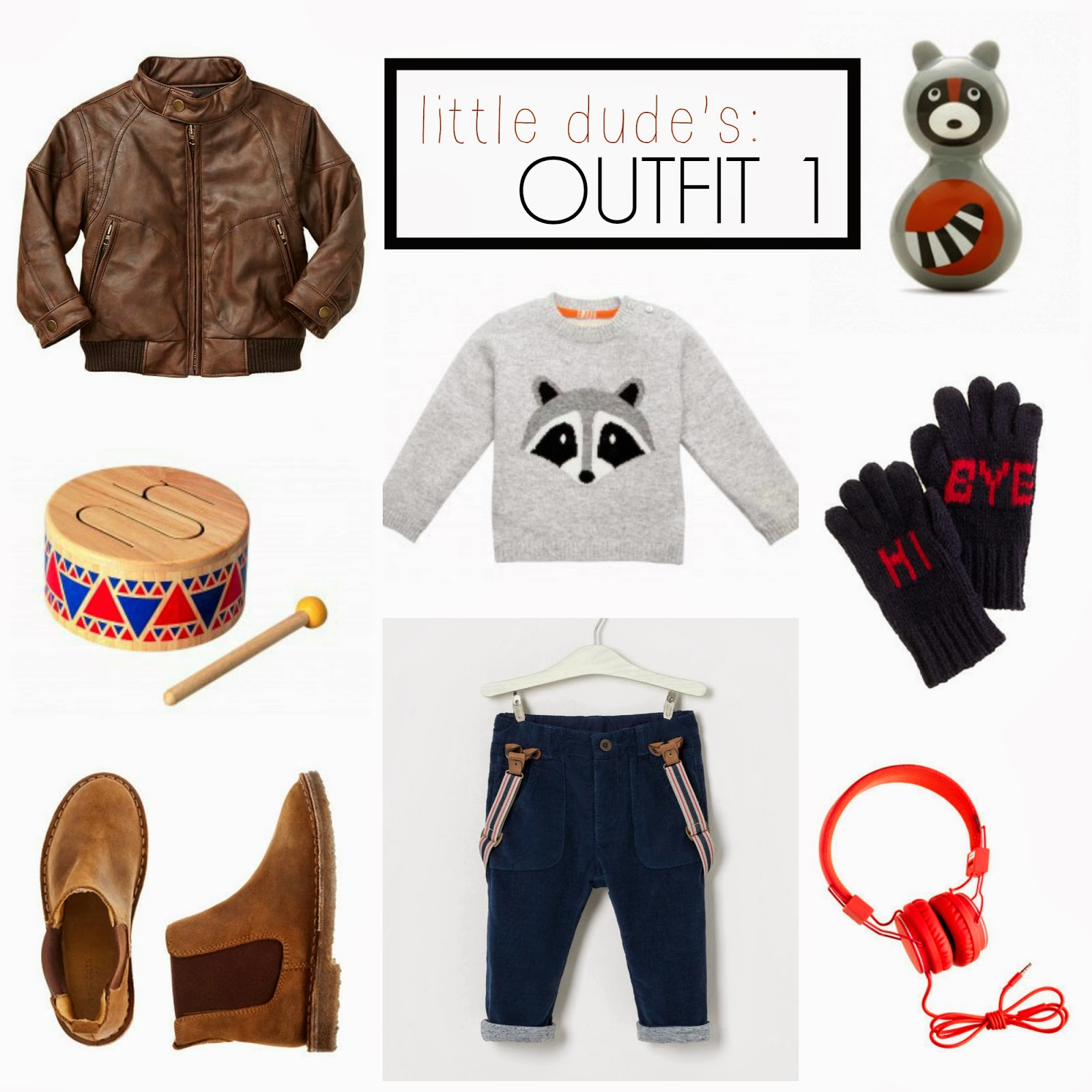 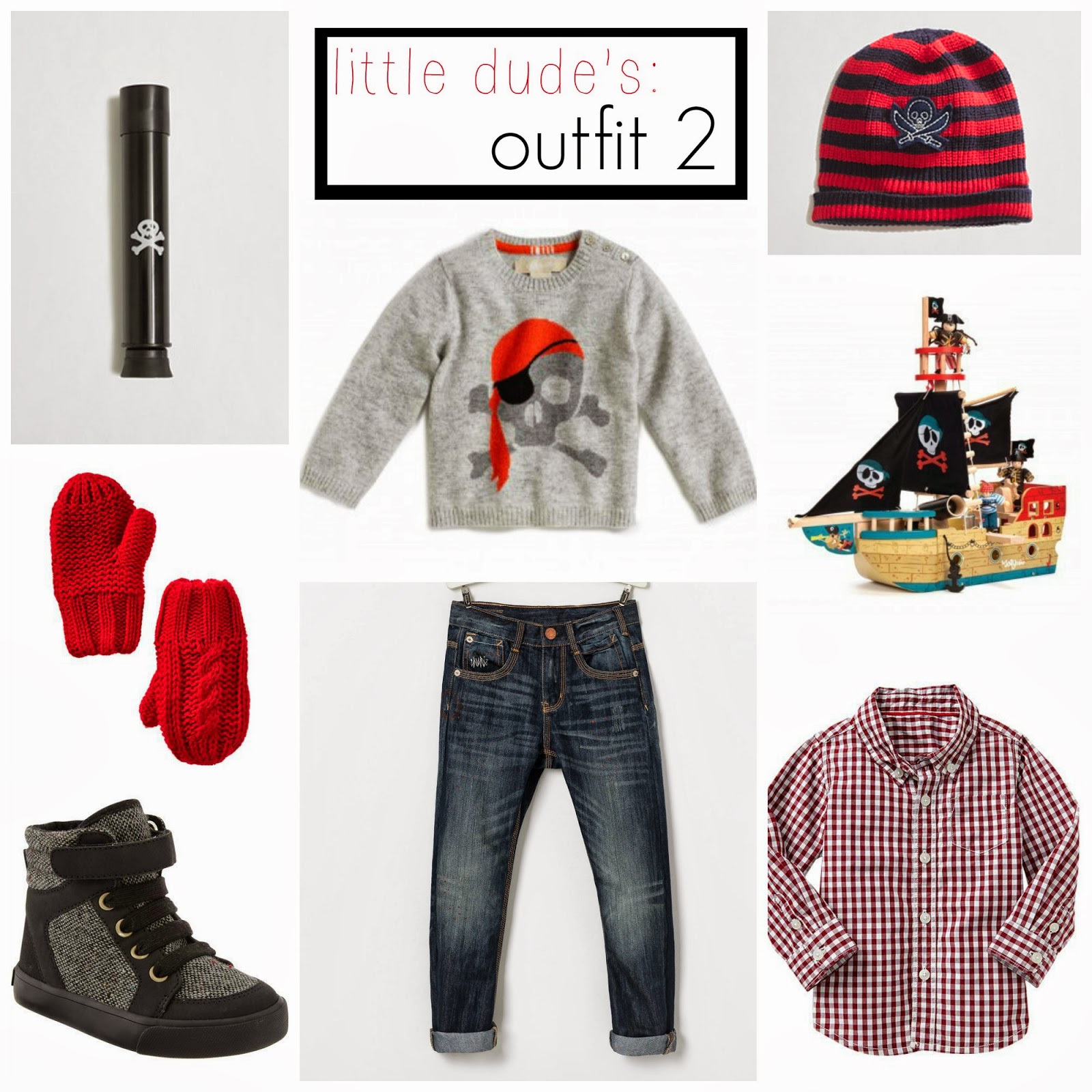 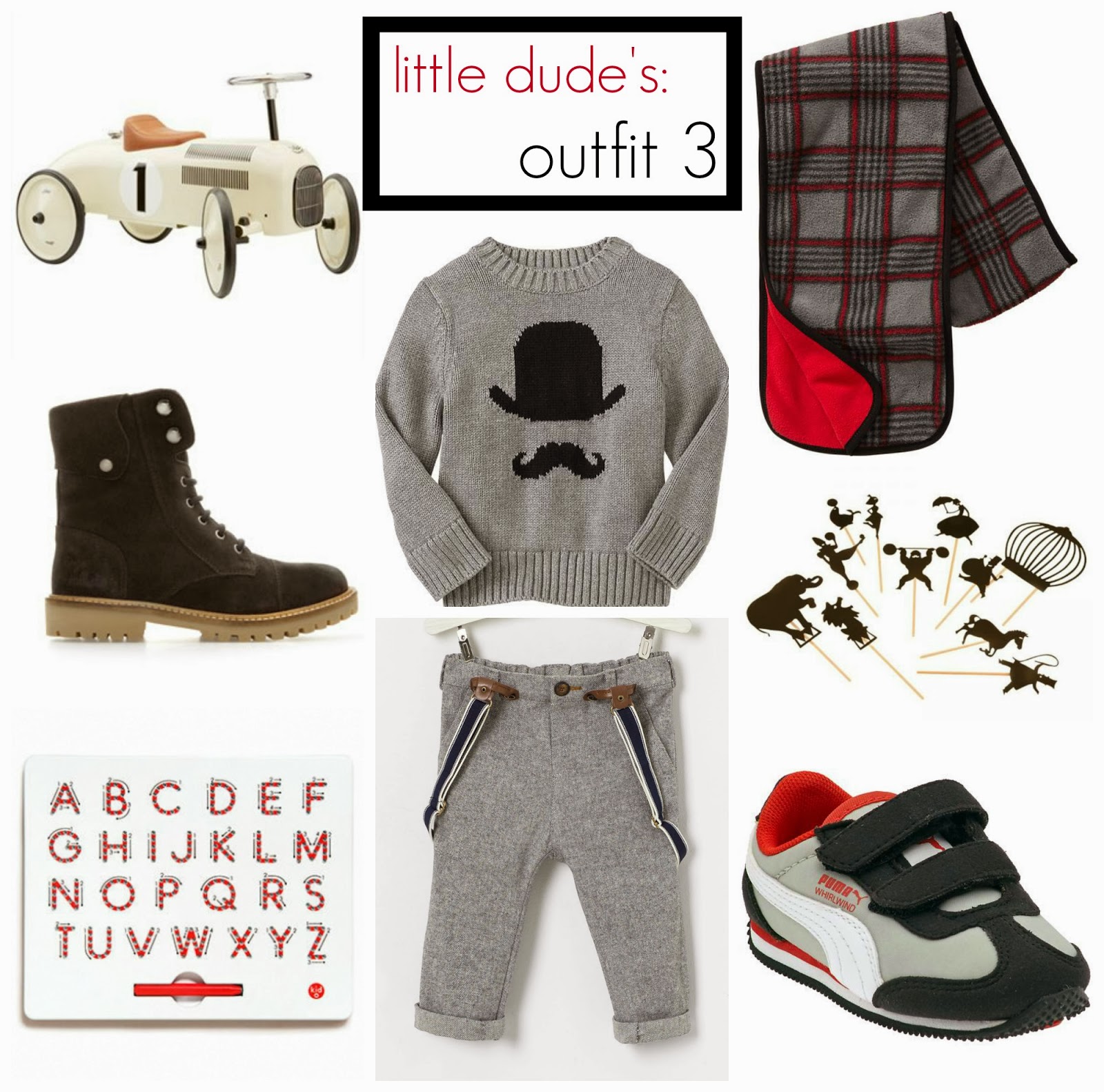 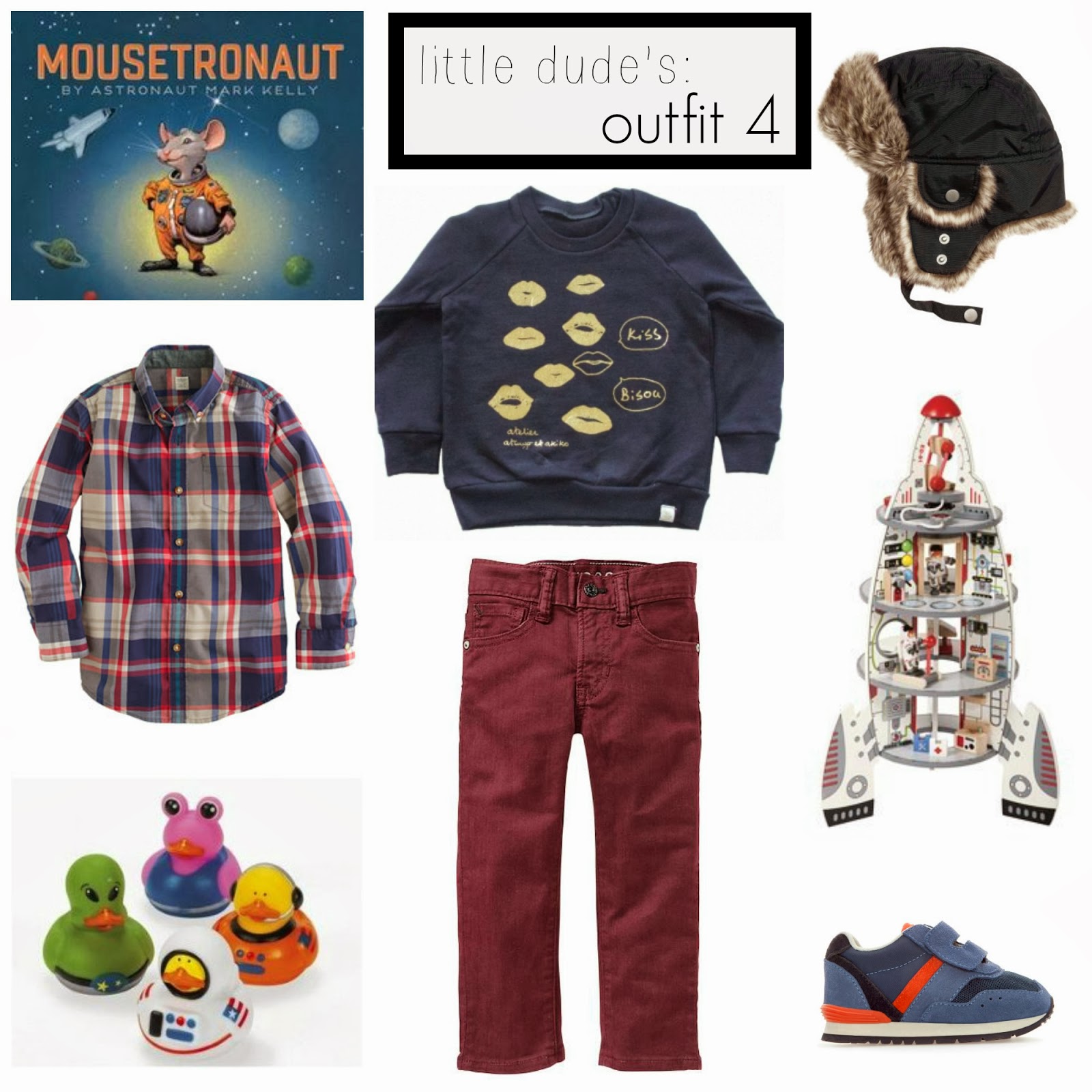 *contains some affiliate links, however i adore each and every one of these items!
3 comments:

today i felt like sharing a little love i have for a new up and coming business [and business owner for that matter!]

the gal behind the scenes of top knot events - sara, is one hell of a woman. i won't give you the long soul-searching story behind sara's journey [you can read about it on her personal blog, saige wisdom] but i am basically in awe that she put it all out there to follow her dream. however i will tell you this, this girl has it. her wit, her style, her drive. her entire heart and soul has been thrown into this new venture top knot events, and i know one thing for sure - it's going to explode in greatness.

event planning is a very personal subject for me as well. for those of you who know me personally, you may remember my desire to start my own event planning company years back which i never had the balls to complete, so needless to say i feel a little more selective when it comes to supporting companies like this. i suppose i have quite high standards.
the reason i mention this, is just to reaffirm that i truly believe that sara at top knot events has the qualities needed to make your moments and memories the best that they can absolutely be. every attention to detail, from the smallest things like place cards to the larger ticket items like venues or caterers, will be taken care of. just take a look at her website! it's incredible! if i was getting married again [to peter, of course!] i know that i would have sara right by my side. i'd happily have her as my third wheel ;)

sara is made to do this. made to create magical, creative, and unique events for us all lucky enough to have her. i wish you the best of luck sweetie, but know that you won't need an ounce of it.

and speaking of luck, why don't you all try yours out with this amazing giveaway she's having this week [enter and read more about it here]. those prizes [!!] amazing, right!? 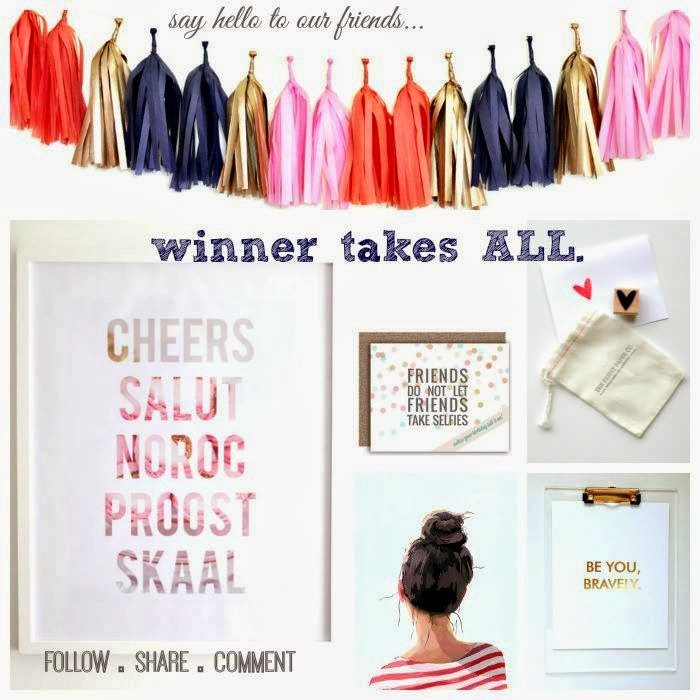 **this post is not sponsored, nor has sara asked me to feature it, i just really believe that good things happen to good people. and she's one of those gems.

you can find more of sara on her personal blog, saige wisdom.
and be sure to check out, top knot events.
2 comments: 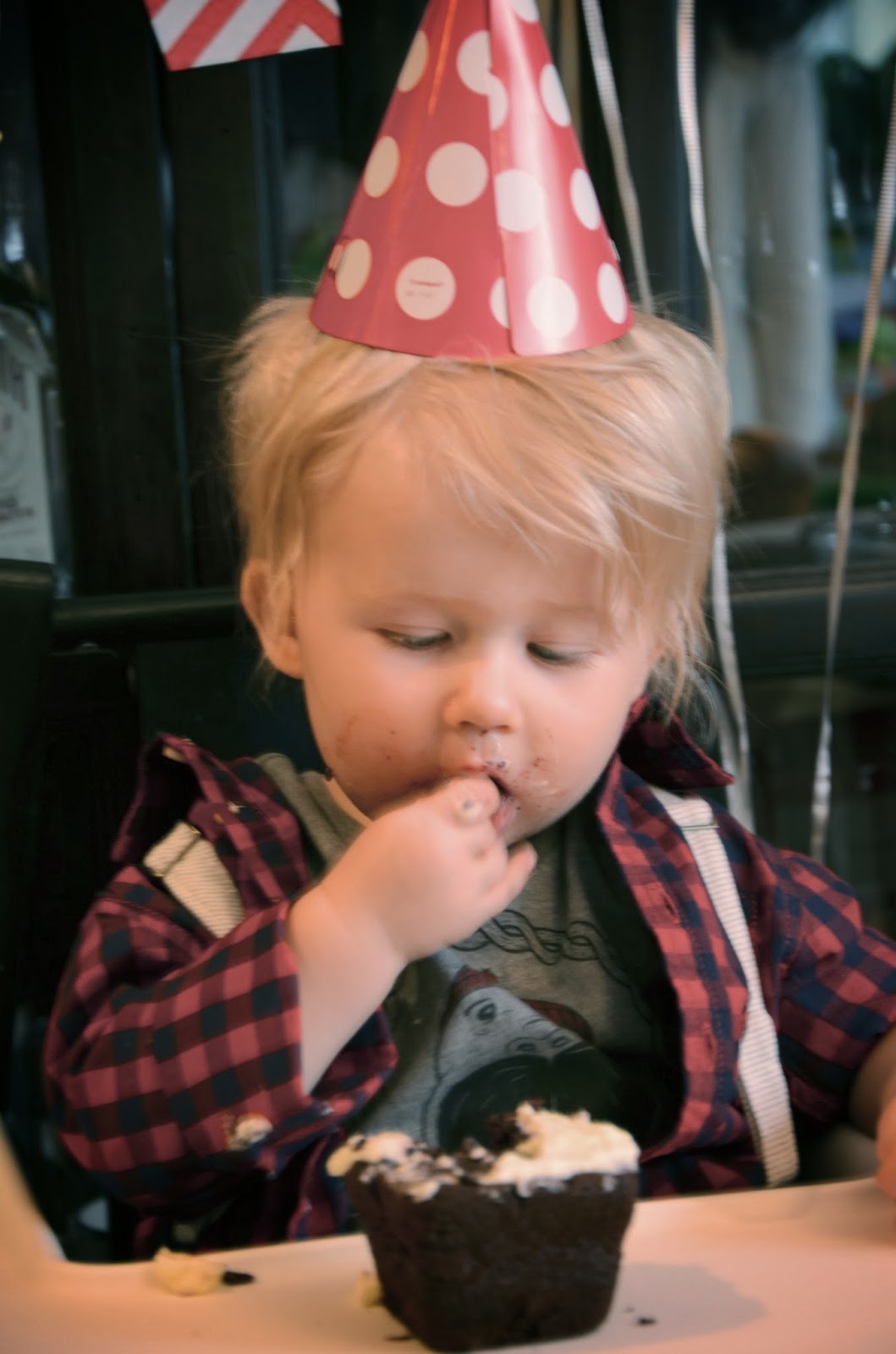 oh, my goodness. i haven't blogged since oct. 25th! not surprising since the entire month of october itself, flew right on by. i mean how is it november 14th already? how?!

i started work again full time, we celebrated jack's 1st birthday, flew to toronto for the h&m fashion family contest as winners [yay!], then spent a few extra days in toronto doing some sight-seeing and enjoying jack's first trip, flew home for a day and then peter and i jet-setted off for a week to celebrate the nuptials for one of my best friends in san diego [jack had sleepovers at the grandmother's houses and had a blast]. it's been a busy month. a good month, but busy.

that being said, i really have a bunch of catching up to do.
so first off, i really wanted to start with our little jack bugg's lumberJACK 1st birthday party. we had over friends and family in our packed house and as encouraged, everyone came dressed in their best plaid.
i've always heard that first birthday parties are more for the adults then the actual birthday babes and i kind of have to admit it's probably true. although, i do know that jack had a blast and his sugar high lasted all afternoon. what a trooper! not one peep of a cry after missing his afternoon nap and just smiles all around. he must have known he was the centre of attention or something and well, he just loves that sort of thing. guess he takes after his father ;) 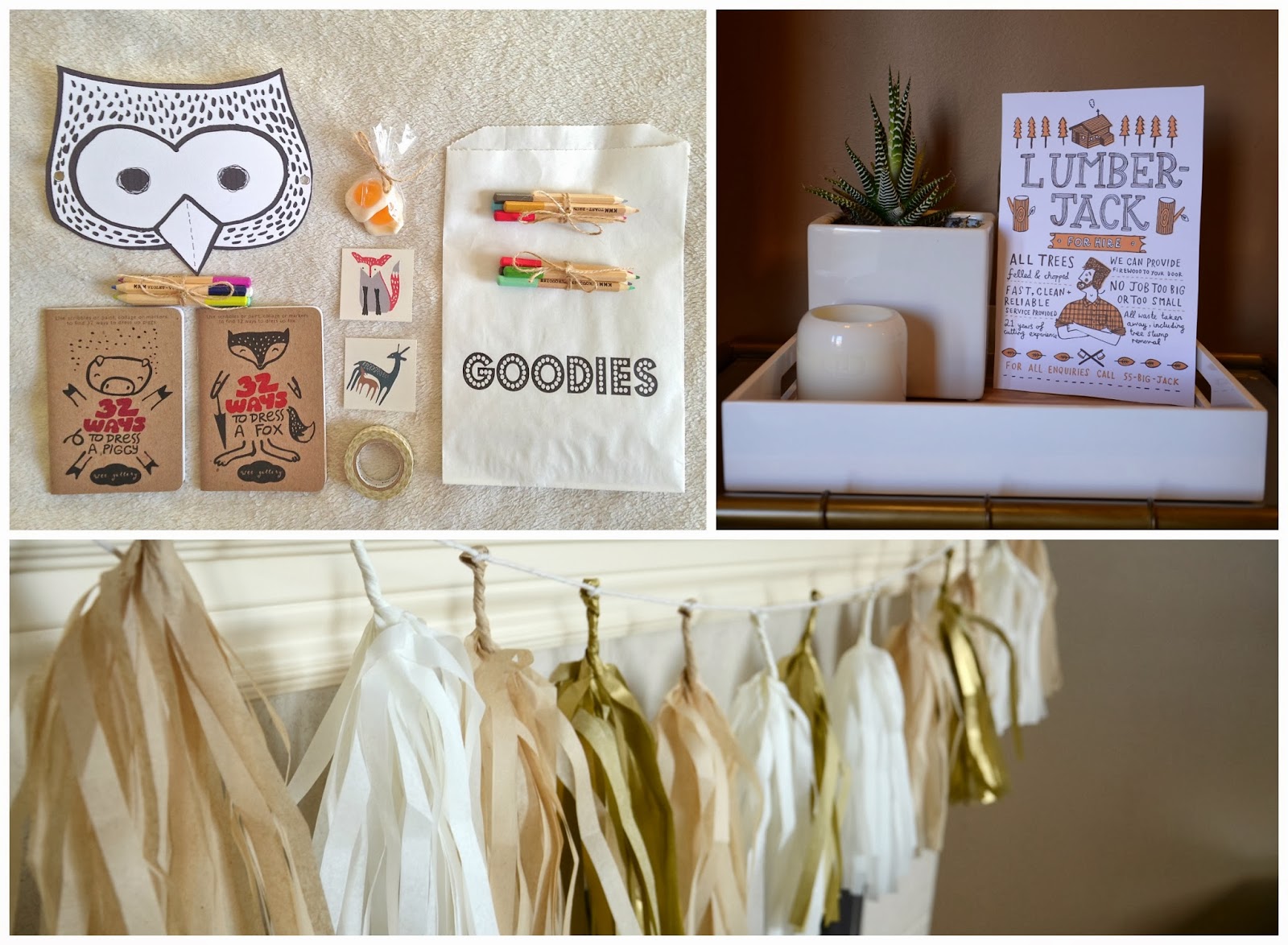 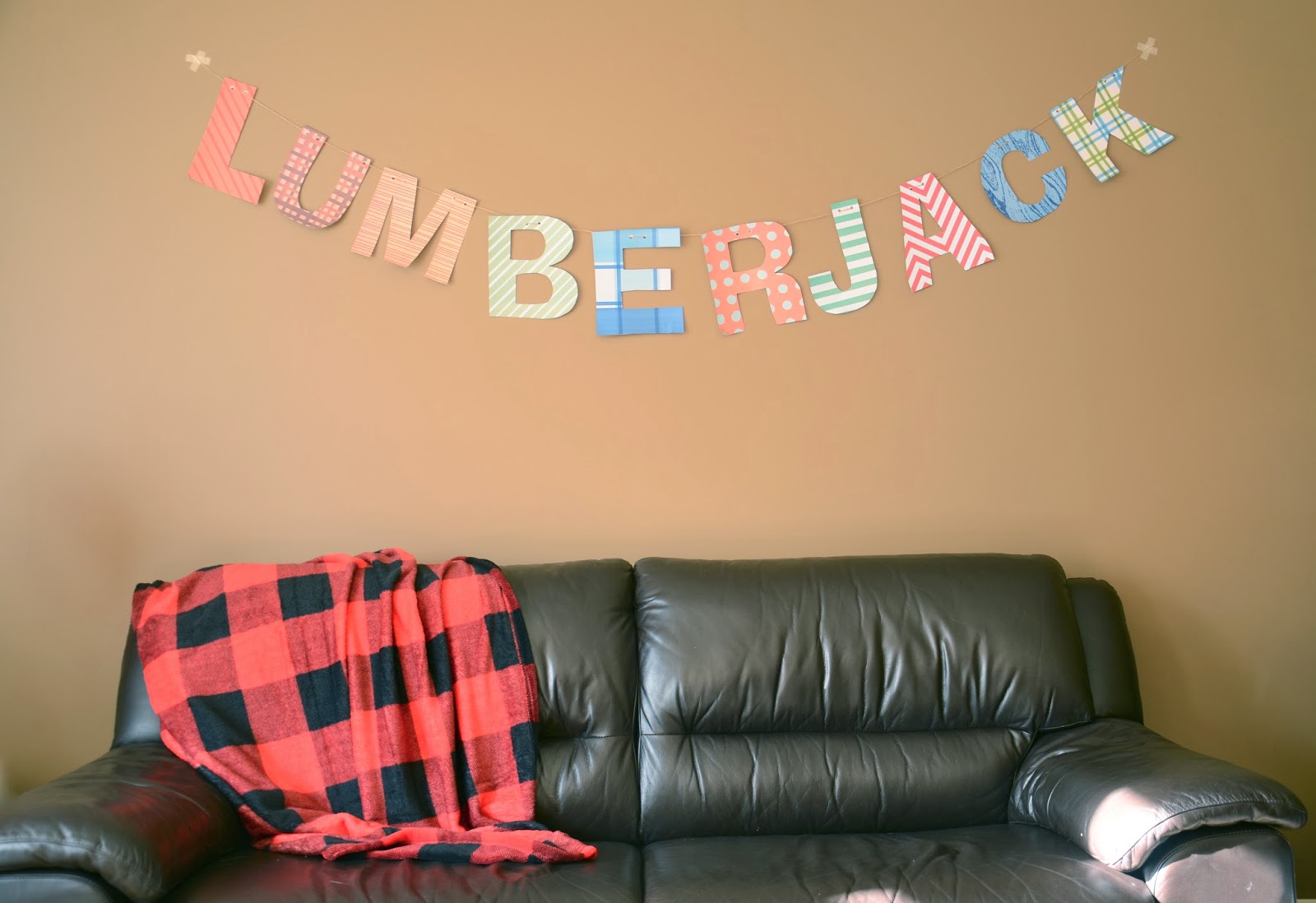 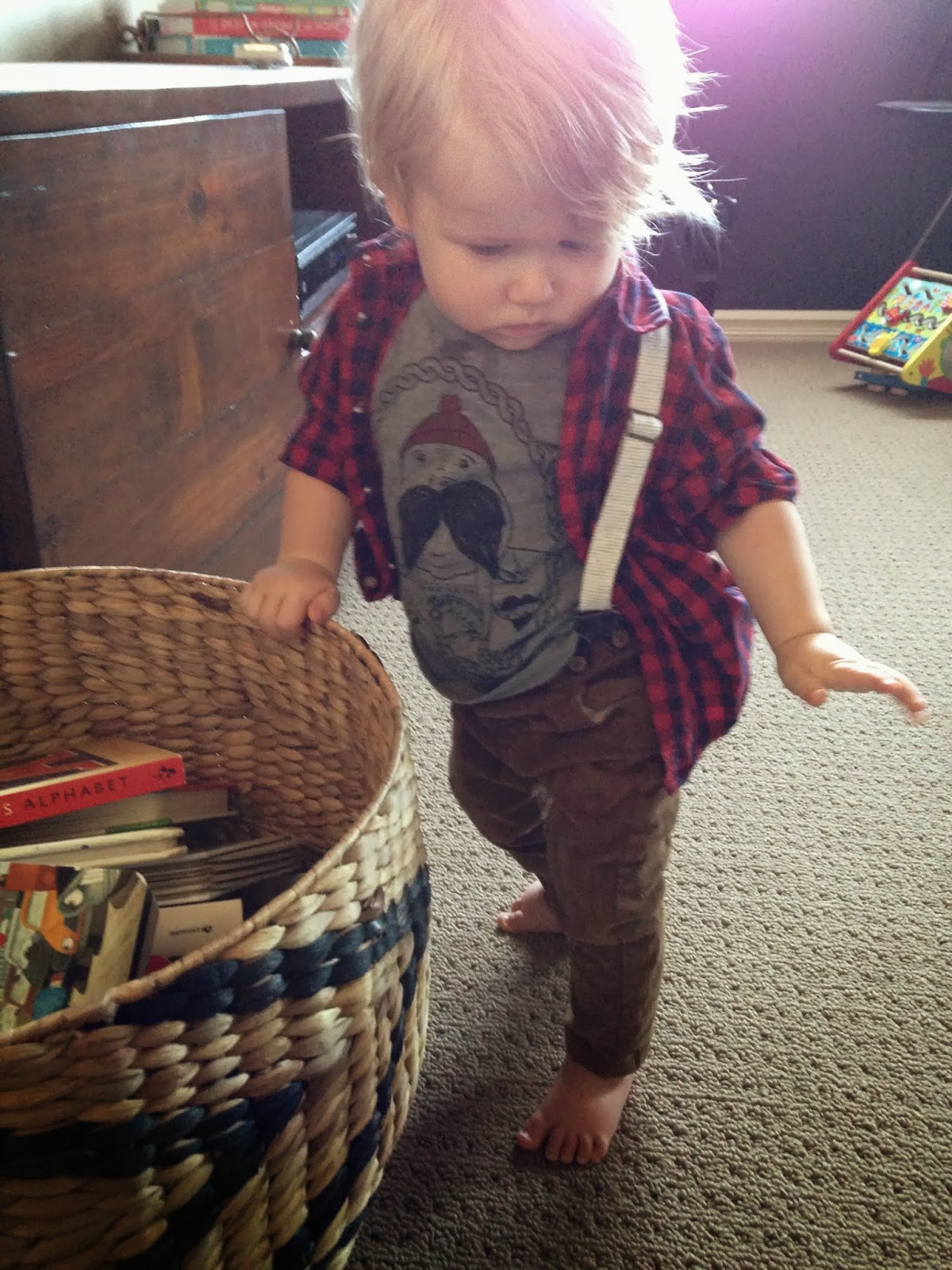 we originally hired a bongo drummer to come to the house and play for the kiddos, but after he called in sick last minute we had to resort to a beard decorating craft station. it was super last minute, but think it turned out to keep a few of them entertained for at least a couple of minutes! ha! we also had a little photo-booth set up and snapped pictures of each guest, which we included in thank you cards that i have yet to mail out [sorry friends!]. our props included beards for all, hats, scarves and a lot of buffalo check. 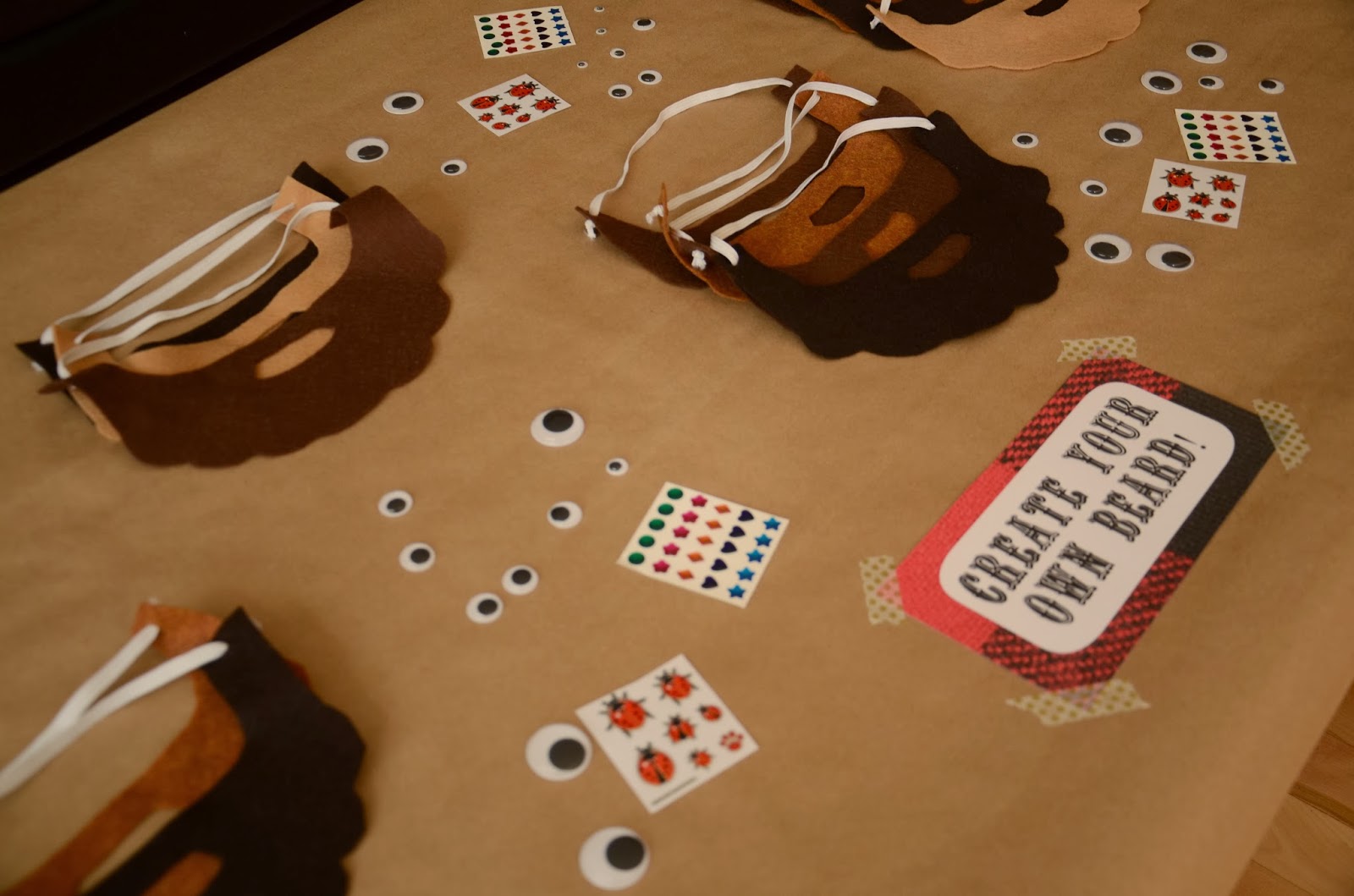 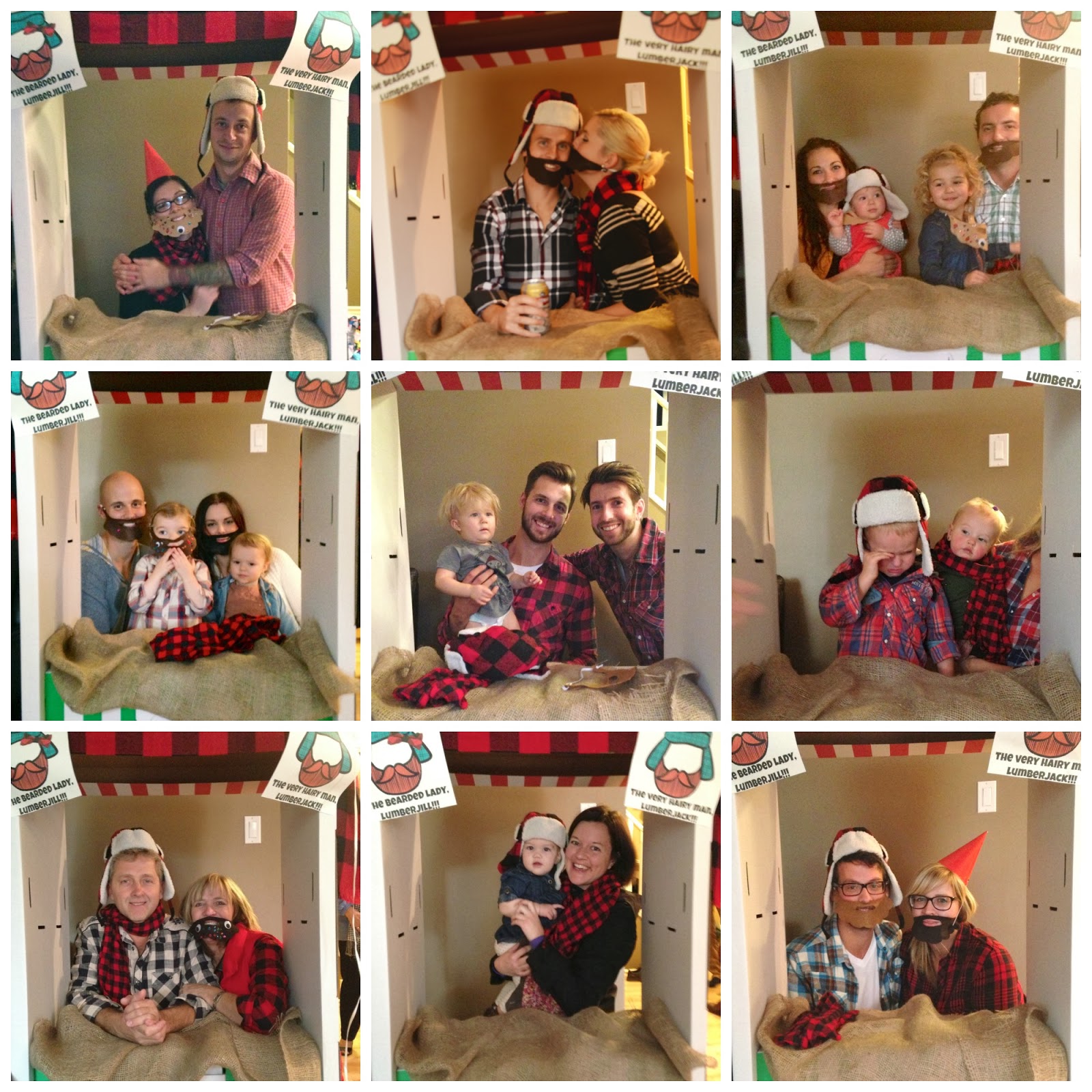 our food table was filled with all sorts of 'lumberjack breakfast' themed goodies. i made these fluffy flapjack pancakes, candied bacon-on-a-stick [by following this recipe], lumberjack sandwiches, sweet timber chocolate logs, and my talented friend morgan brought over some maple bacon cupcakes [thank you so much!] which were absolutely delicious! i highly recommend! she followed this recipe, as i know some of you will ask. we also featured 'uncle si's sweet tea' as our featured drink. 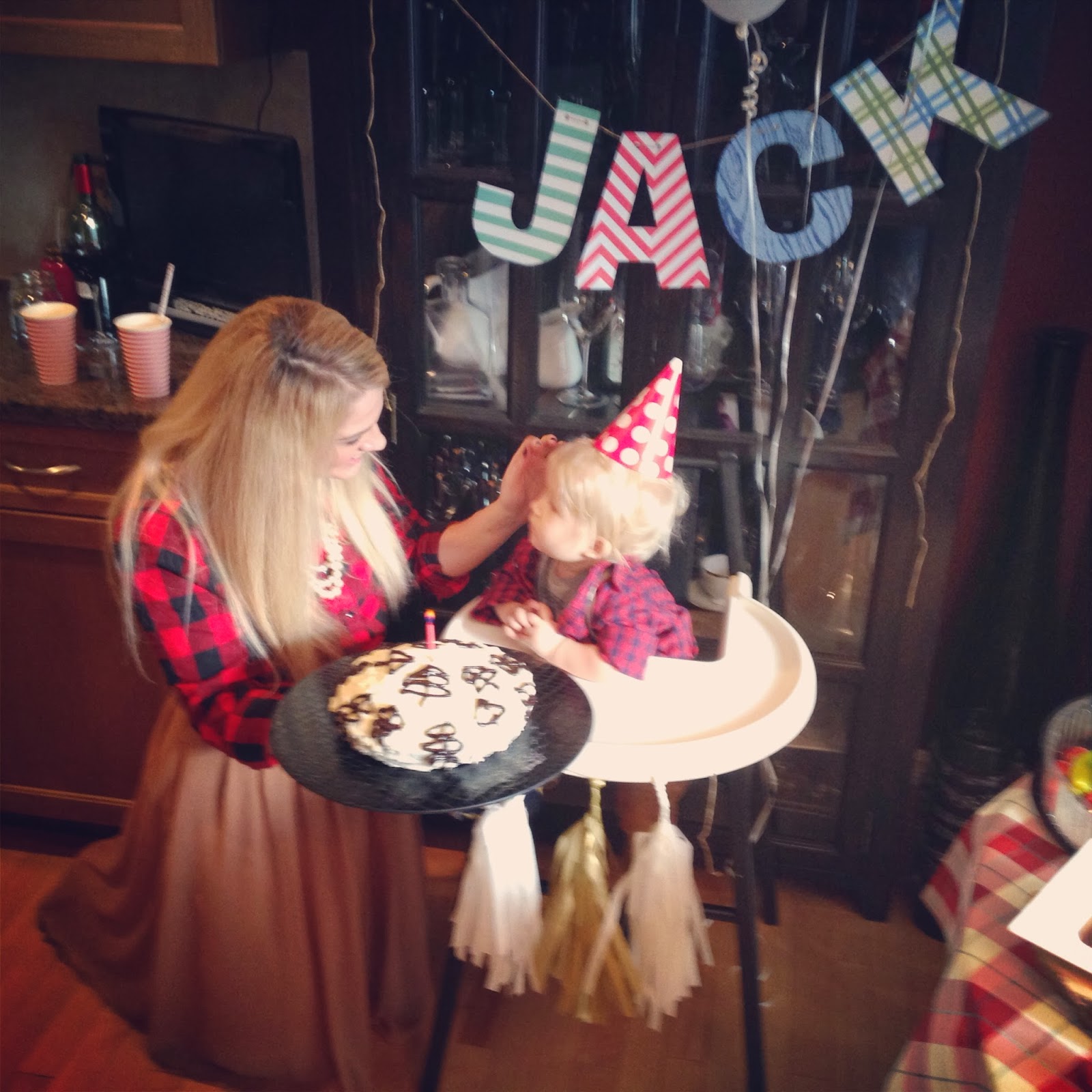 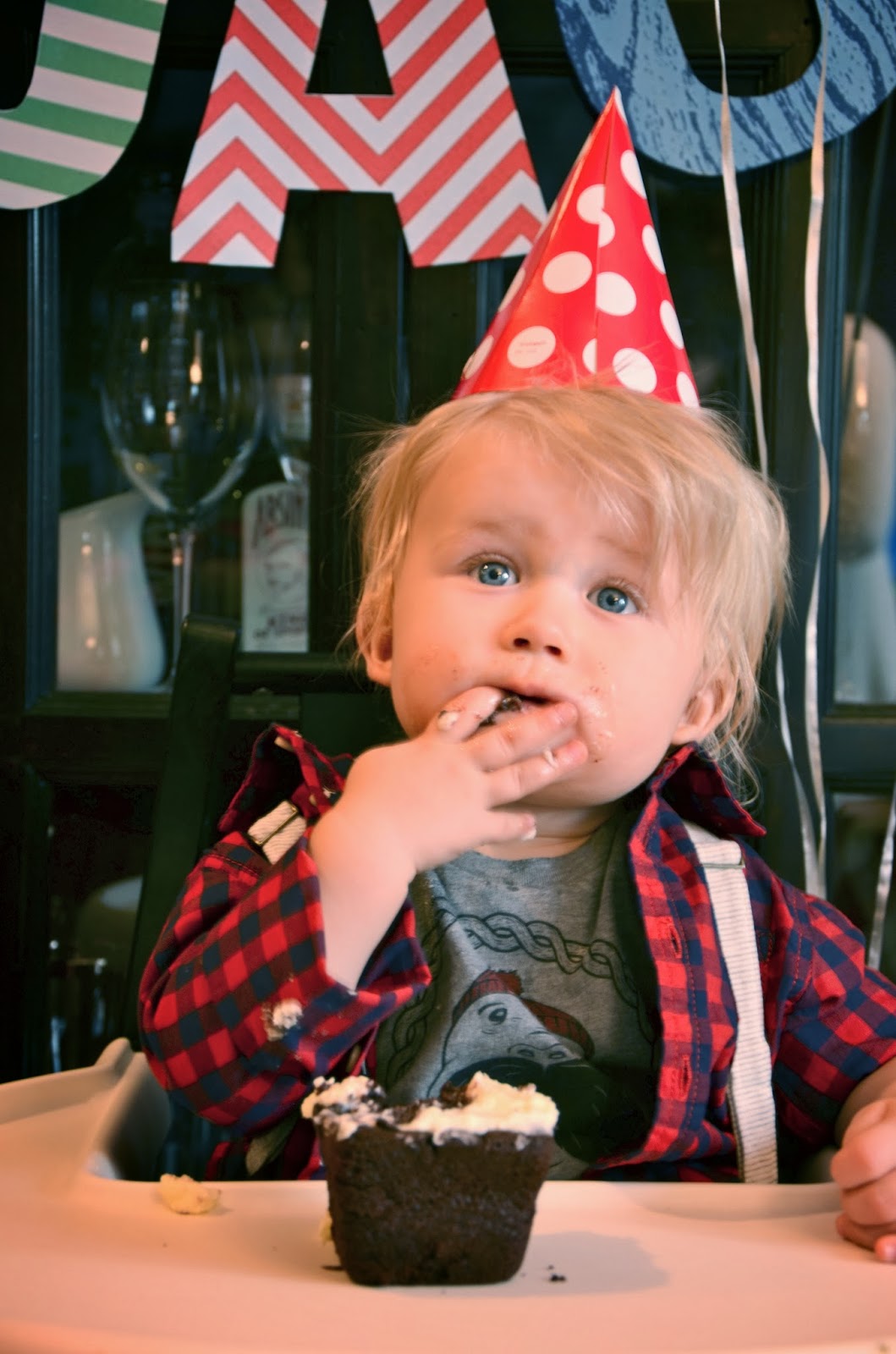 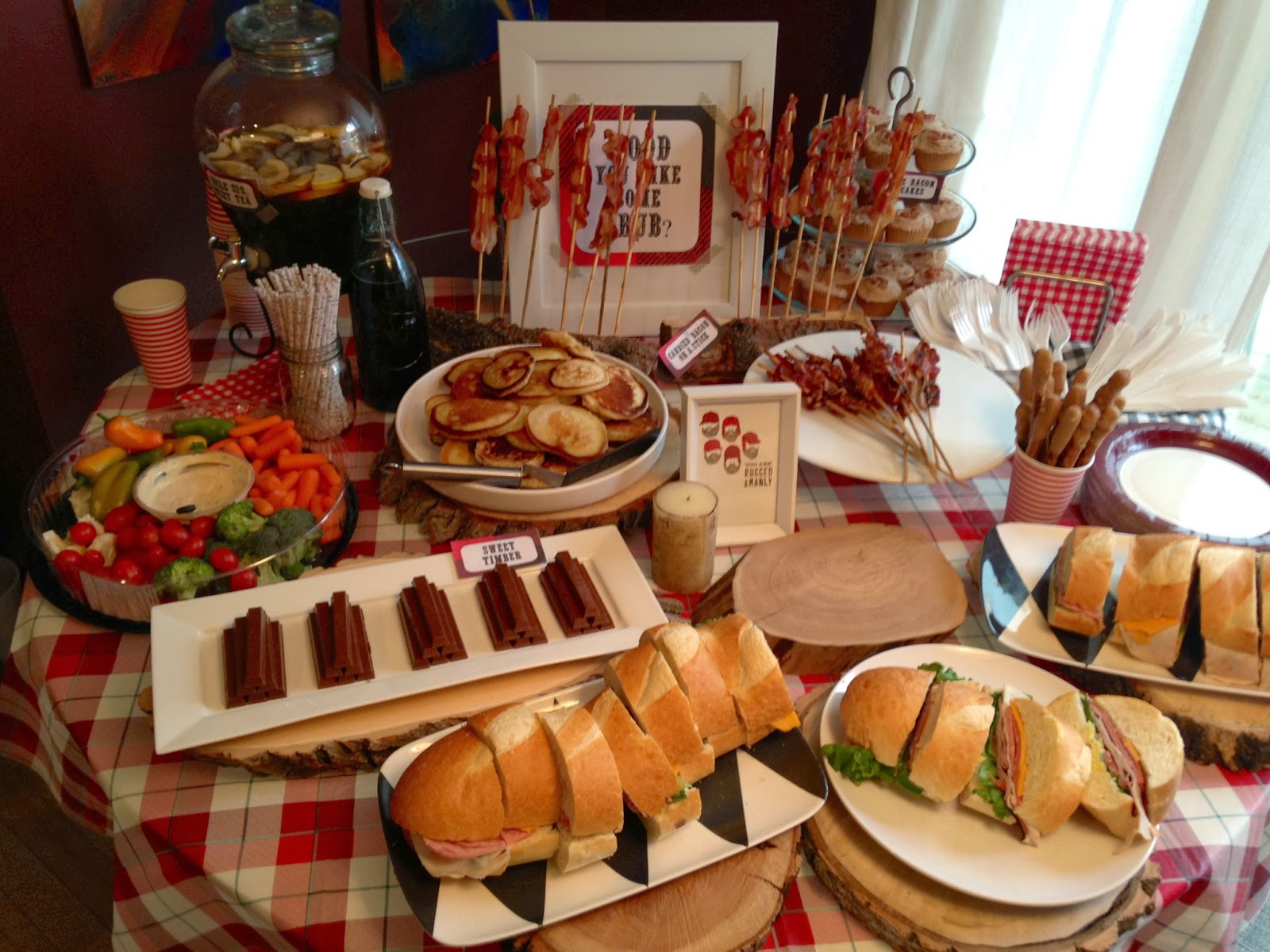 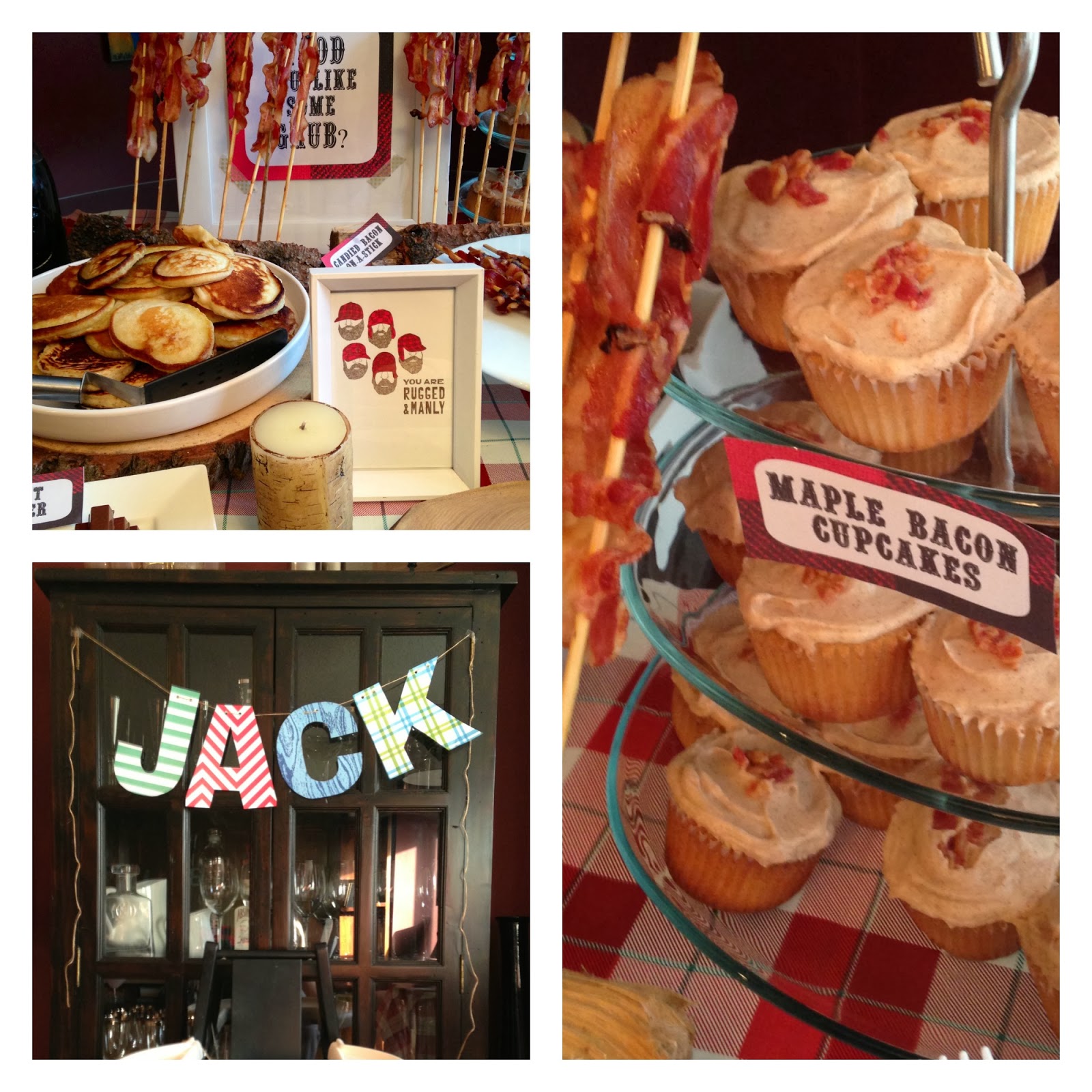 the kiddoes each went home with a goody bag filled with jacks favourite colouring book, some pencil crayons, egg candies, an owl mask and tattoos from wee gallery [the owl mask, book and tattoos]. we cannot thank the wee gallery enough for such awesome stuff. we simply love that store. 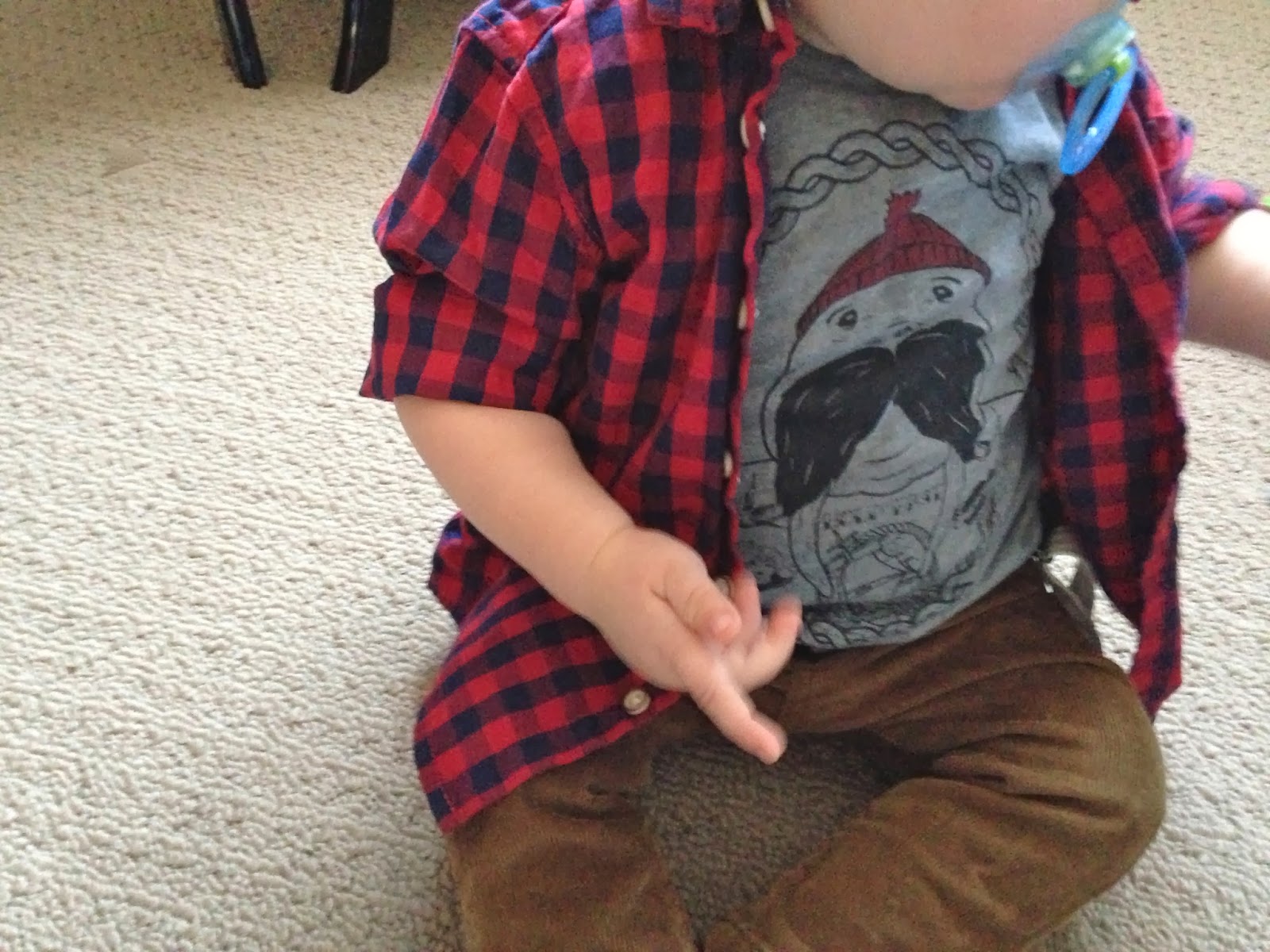 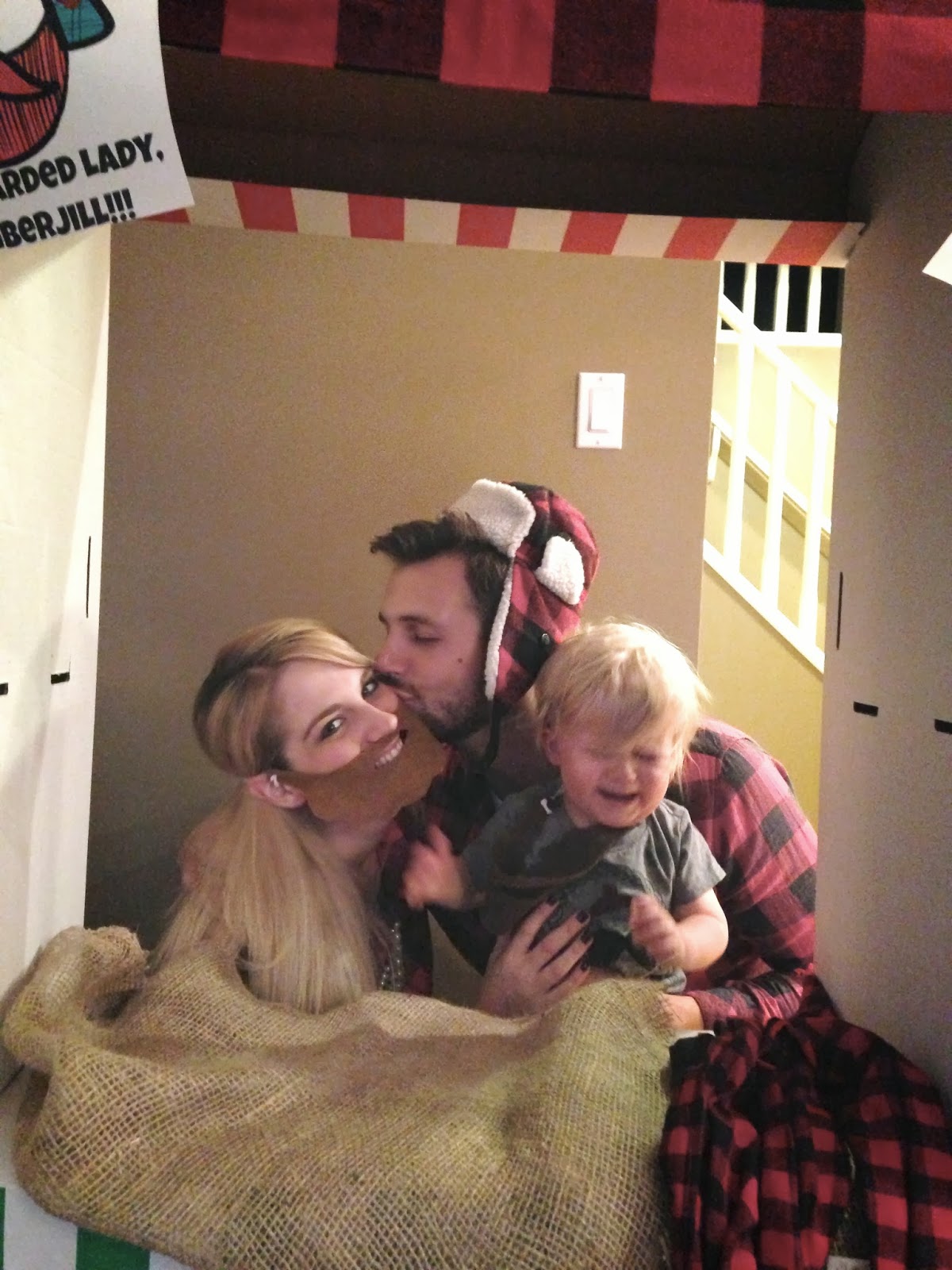 overall, i think jack had a blast and we got to experience our baby's first birthday. it was a very very good day.
happy birthday, sweet boy. we love you more than we have words. xo. 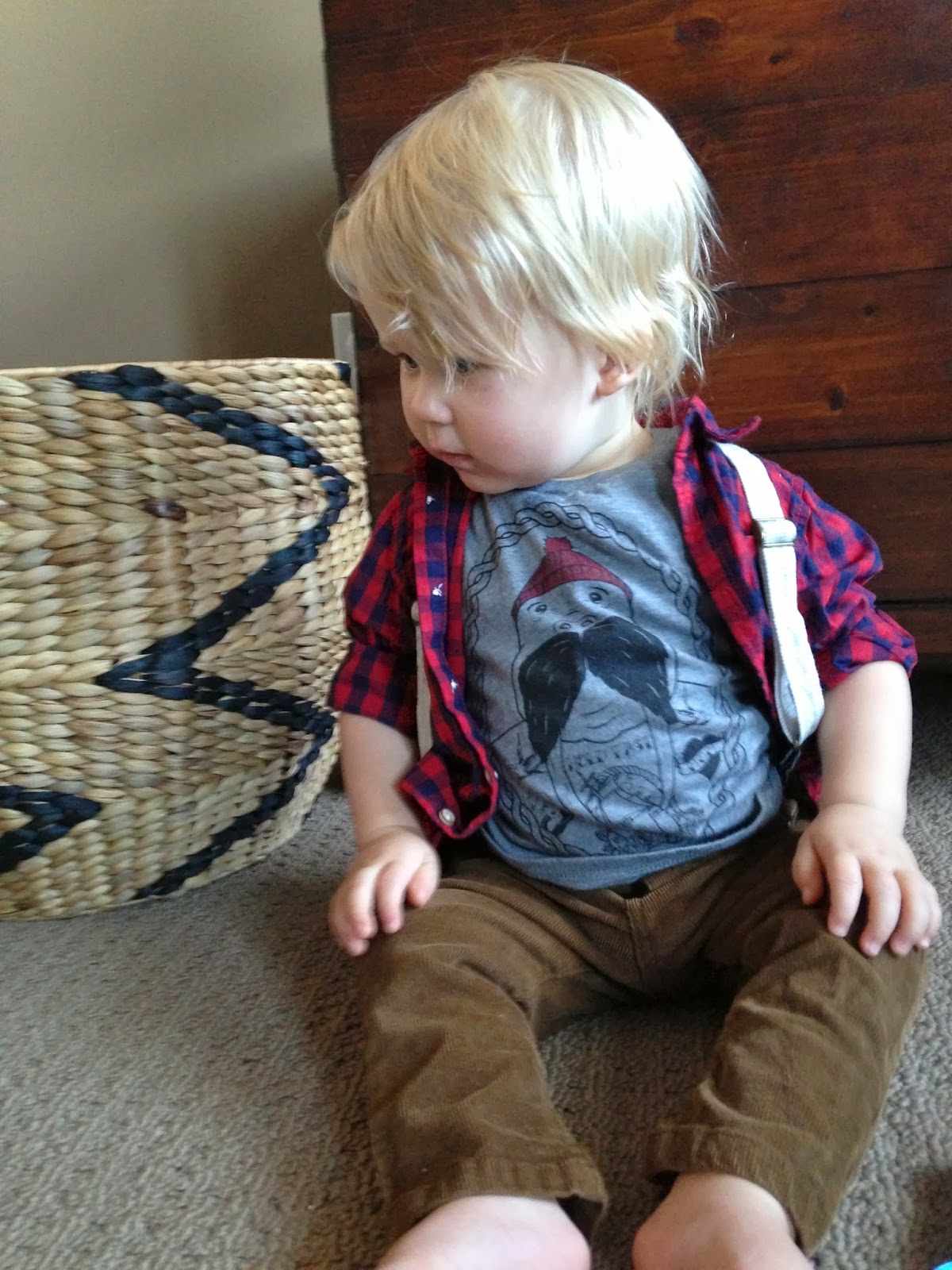