.Breakfast with your Lover.

Like I mentioned here. It was husband's birthday on sunday. And I slept in.....missing all the big plans I had on becoming super wife for the day. Bad Erinn.
So I made this for P on monday morning. It might look like slop, but it was actually a tasty, warm-your-stomach kind of breakfast that is perfect to eat on the couch and watch reruns of Seinfeld.
So we did that too.
{and ps. some say that cinnamon is a natural aphrodisiac.....just saying!}
Cinnamon-Swirl Breakfast Bread Pudding
{recipe by katie lee from 'the comfort table' cookbook}
It is said that the Queen of Sheba used cinnamon to mesmerize King Solomon. So it has power. Prepare this bread pudding ahead of time so that in the morning, all you have to do is turn on the oven.
Ingredients: 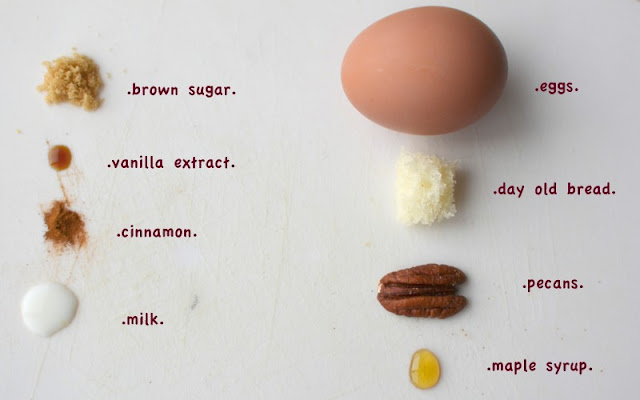 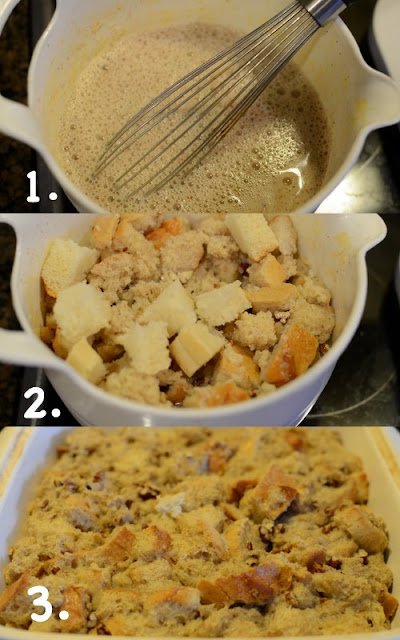 1. In a large bowl, whisk eggs and milk. Add the brown sugar, vanilla extract, and cinnamon, and whisk until all the ingredients are completely incorporated.
2. Stir the bread and pecans into the egg mixture. Coat an 8-inch-by-8-inch baking pan with nonstick cooking spray.
3. Pour in the bread pudding, and cover with foil. Let sit in the refrigerator at least one hour and up to overnight. Preheat oven to 350 degrees.
4. Bake the bread pudding, covered, for 30 minutes. Remove the foil, and bake an additional 10 minutes, until the pudding is browned. Pour maple syrup all over your bread pudding. I like to soak mine, but you can add as much as you like.
**And actually now that I think of it, this would make an excellent meal for Christmas morning. And it makes your house smell delicious!