Does your spice closet/drawer look like this?
It's like a mini tsunami ran through my kitchen and only decided to attack my spices.
And these pictures don't even do it justice. I had already pulled out 1/2 of the items from it before I took this picture. Everything doubled on each other. Something falling on you when you opened the door. Never being able to find what you need even though you have triples of the same bottle! It was a disaster.
After searching for the damn cinnamon for a FULL 5 minutes, I knew something needed to be done. Well that and husband was starting to literally throw spice jars at me because when he opened the door, they would fall at you with super speed, hitting you right in that sensitive spot on your head while you where cooking. Like a bullseye.
I actually ended up throwing away 56 bottles. No word of a lie. Not to mention all those nasty bags of spices always spilling over.
Well. Not anymore!
I bought these gorgeous little spice bottles at Superstore for $1.50 each. They hold 2 bottles of a normal jar and fit perfectly into my pull out drawer {where my spices are now calling home}.
I used clear sticker labels from Staples and just a permanent marker to label th. I may actually purchase a label maker in the near future and label them that way for a clean, uniform look, but in the meantime this does the trick and I think it looks kinda cute. And hubby likes it better like this. He even quoted this gem of a line "it looks better this way, handwritten. It's more Jamie Oliver & Michael Smith rather than Gordon Ramsey", which I found utterly adorable. And played on my heart as both Jamie and Michael are two of my fav's. 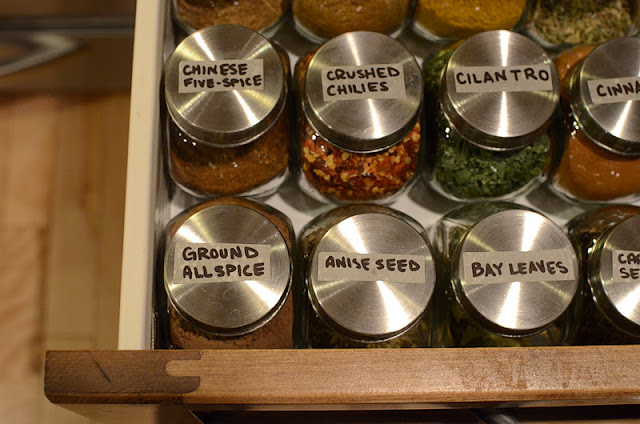 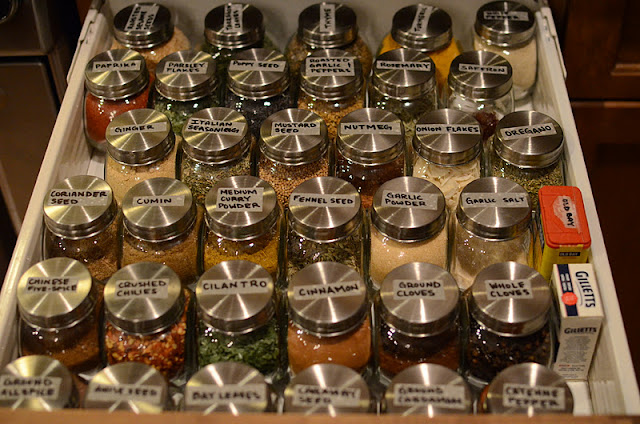 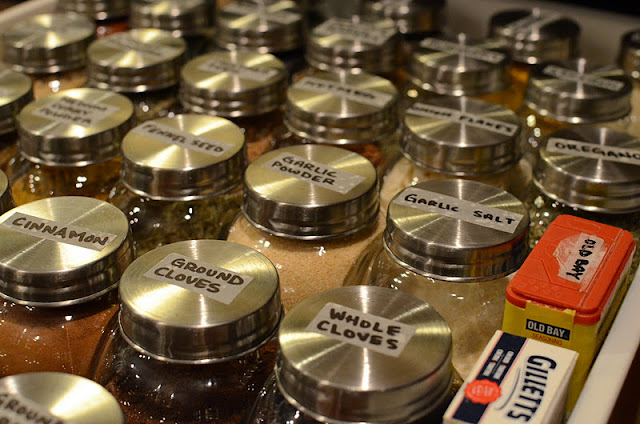 I think this is a major improvement from before. Now, everything is at eye level and easy to spot. I won't be buying doubles {or triples} of jars. And nothing will fall on top of my head.
Also, here is a picture of the over-the-oven drawer that now holds my tea towels, ziploc bags, and tin foil/ saran wrap. Also any extra spices that aren't used as frequently as the others or are Costco-sized jars, and wouldn't fit into the new spice drawer.
Clean, Organized, and Efficient.