As I mentioned over the long weekend, we had some family over for a BBQ. Originally, the in-laws where supposed to come over and since we were trying to have a belated Father's Day dinner, I wanted to make something special for the handsome guy. One of his favorites. So I came up with Home-made Rum Raisin Ice Cream! 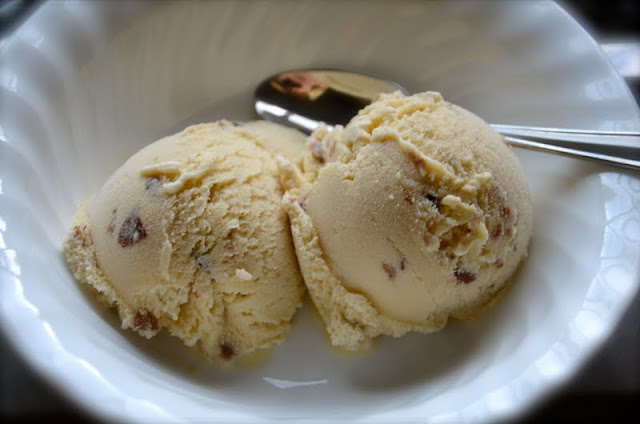 I know he loves Rum and who doesn't like ice cream. So I figured I'd be scoring some major brownie points for this one. Not that I really need it...he's my Buddy.
Things didn't work out as planned, but the ice cream sure did. It was creamy, flavorful, and delicious!
Here's the recipe. Now go score some of your own brownie points!
Rum Raisin Ice Cream
{recipe found here}
2 tbsp Raisins
1/4 cup Dark Rum
2 cups Heavy Cream
2 cups Whole Milk
1 tsp Vanilla Extract
2/3 cup firmly packed Brown Sugar
8 Egg Yolks
Directions:
1) In a small bowl, soak the raisins in the rum. Set aside.
2) In a 2-quart saucepan over medium heat add the cream, milk and vanilla extract. Bring to barely a boil. Remove from heat.
3) In a large metal mixing bowl, whisk together the brown sugar and egg yolks until well combined and "satiny" in appearance. Slowly, in a thin stream, add the still warm cream mixture to the yolks, and return the mixture to the saucepan. Cook this mixture over low hear, stirring constantly until it coats the back of a wooden spoon, about 3 minutes.
4) Strain the mixture into a clean bowl, and let cool. Remove the raisins from the rum and coarsely chop. Add the raisins and rum to the mixture. Cover. Chill until cold.
5) Add the mixture to your ice cream maker and freeze according to the manufacturer's directions.